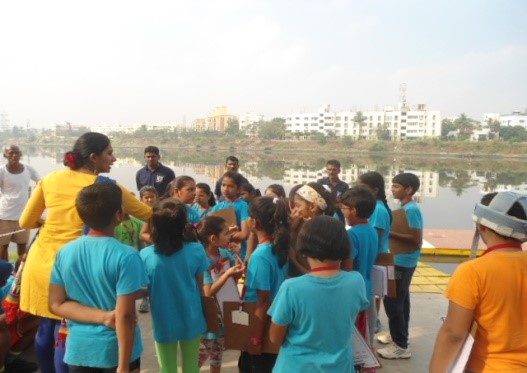 The Dynamic Dolphins students have been studying rivers and pollutants in rivers. To extend this learning they went on a field trip to the Madras Boat Club on March 3, 2017. The objective was to explore the impact of Water Pollution on the Adyar River and its effect on the Madras Boat Club and the environment around it.

Here they interviewed and interacted with Mr. Bharat, the trainer and Lascars – Mr. Dhandapani, Mr. Bhupendar and their colleagues. They asked questions related to the kind of pollutants and learnt that a lot of waste from sources like meat shops, drainage outlets, and people were dumped into the waters. They were surprised to learn that the water body that was now black was  clear as crystal in the 70s! Mr. Dandapani, a lascar who had been with the club for over 50 years shared that years ago, people used swim, bathe, wash their clothes and go boating in the same river. However, over the years, the dirt had settled on the river bed giving it the murky green/black colour. He even pointed to a plastic packet in the middle of the river and told the children that it was animal fat that was discarded by meat sellers.

The students concluded that the present state of the Adyar River was a result of negligence caused by humans. Human intervention has led to the destruction of habitat of many aquatic animals, become a source of diseases, adversely affecting the environment and air around it.

At the club, children also went on a listening walk and recognized different sound sources from the surrounding and listed them. They classified the sound sources into high and low pitch and loud and soft sounds. They then drew a wave representation of two sounds from the list.

Being a rowing club, students also had fun learning about the scull boat and the science behind its mechanism. One of the lascars patiently explained the different parts of the scull boat.  Children asked many pertinent questions. He patiently answered all the questions for them. He explained how in the boat there were fixed shoes which a rower had to slip into. There was an adjustable and movable seat which helped the rower perform a certain motion in coordination with his hands and legs and this helped the boat move forward. There was a pin at the bottom of the boat which helped change direction while rowing. He also showed them different types of boats that were put on display like the 5-seater boat in which a crew of four and one trainer could sit.
The trainer, Mr. Bharat also look the kids to experience sitting on an Ergometer. He explained the sitting posture, feet strapping, load handle and pull handle. He also demonstrated how it was used to build fitness. The children were very excited to experience the same for 5 pulls! They also listed out the instructions for using an Ergometer.

The Madras Boat Club very traditionally has been tracking the water levels during flooding, in 1947, in 1963, 1983 and the most recent in 2015 one. The lascars helped in measuring the flood levels and marked them on the pole. The viewed these plotted a bar graph with this data.

They also got to sit near the river side to write a descriptive text based on the sound, smell, sight and feelings they experienced in that setting.

A very fruitful morning that was not just not educational alone but a lot of fun as well.