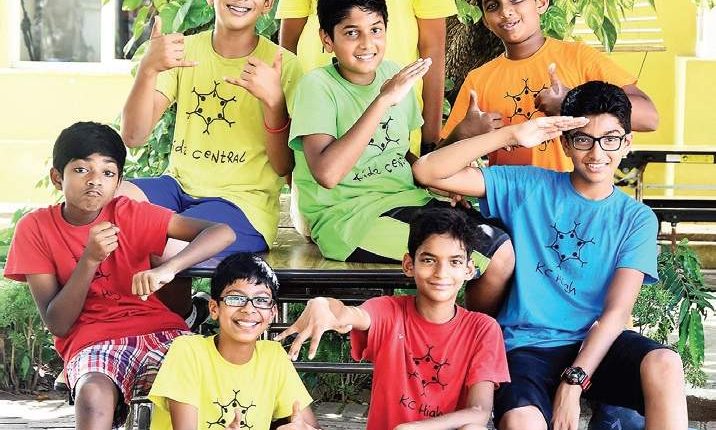 A team of nine school students — eight from KC High School in Kotturpuram, and one from Pathway World School, Arivali, represented India at the World Scholar’s Cup (WSC), South Asia region, held at Cape Town, and won the tournament in August. Founded by Daniel Berdichevsky in 2007, WSC is an annual event in which over 30,000 students from 35 countries participate. The competition mainly includes debates, literature writing and a quiz.

The event takes place in three modules, one each in Hanoi (Vietnam), Athens (Greece) and last in Cape Town. Since 2016, these kids have been through a rigorous selection process, which began in Chennai last year. After clearing the first round here, five kids went to Hanoi, where they cleared the second round. And one kid represented his team in Athens. All the expenses for the trips came from their own pockets.

Thanks to their experiences in these places, they nailed the Cape Town hurdle with ease, calling it ‘piece of cake’ which made them eligible for the final showdown ‘Tournament of Champions that will take place in Yale University this November. “It was a great experience. It not just the travelling part but the exposure we got by meeting so many people and getting know so many different cultures,” says Arihant, one of the team members.

The tournament has six subjects — history, literature, mythology, arts and music, science and technology and social studies. They were trained by two coaches, one for Greece and Hanoi and one for Cape Town. The team was divided and each was given a subject to cover. After the deadline, they had to exchange and help each other. The preparation required a lot of dedication and sacrifice since they had to put in several extra hours every day apart from their regular class.

“The journey took us to new places and it was a unique adventure. More than creating memory, we were creating a future. This way of socialising will surely help us a lot. Now I have friends across the world,” says Shriman, the Greece team member.

“I got to meet many people with different social skills and it is also going to add up to my skills too since this trip earned me life lessons in addition to memories,” says Kriyash Karthikeyan who came third in individual subject in South Asia Region. “We had to read a lot and continuously motivate ourselves and each other. It taught us to work together as a team and help each other.”

Though the kids are happy and excited about their winning streak, they are now focused on the finale at Yale University. “It is going to be more challenging since the competition has filtered down to the best of the best. We need more determination and even more focus,” says Vikhram, another team member.

The team faced maximum competition with 3,500 and 1,500 participants in in Hanoi and Athens respectively. In Cape Town, they were set against 500 participants from the US, Kenya, Mauritius, Zambia, Pakistan and Zimbabwe.

KC in the news – The Hindu

Why do I love My Chennai ?
Comments are closed.